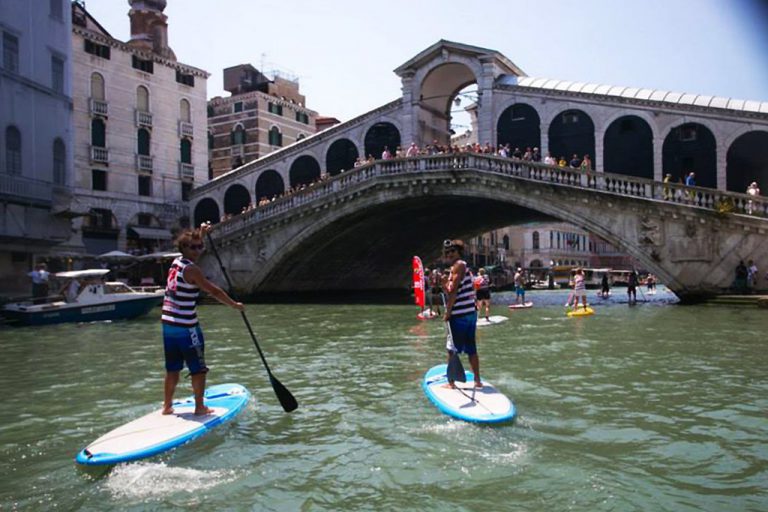 Venice town could definitely be a paradise for paddlers. It is the perfect city for lovers of water, lovers of boats, lovers of canals, all kind of lovers really!!. But all in all that makes a huge amount of lovers…And that’s how I felt while exploring it: overcrowded!

Each year, two major SUP gatherings offer the chance to enjoy the waterways: the Vogalonga, a historical journey of 30 km which brings together over 1,500 rowing boats in May or June, and Surfin ‘ Venice, a smaller event taking place in August. I chose the second option.

I had never been in Venice before ... so of course, jumping from a plane into a vaporetto, taking the boat to reach the city center, walking around bridges and being surrounded with water was just awesome. Logistic is very impressive, the city is splendid, history and art are everywhere. And don’t get me started on food and wine…

All paddlers met on Mercato that Sunday morning where Arginelia from SUP in Venice welcomed more than hundred paddlers from all over Europe for the day. Clubs from Holland, Belgium and from all over Italy as well as a few couples, 4/5 French people, several groups of pensioners and associations and the educational boat of Gloria Rogliani - Voga - which introduces paddle sports to children and educates them on the laguna ecological problems were taking part. Indeed, the laguna is being serioulsy threatened first by silting and also waves. His future is jeopardized: either will "the Queen of the Seas » join the continent, or in the opposite it will become an island.

The traffic is very dense on the canals. Our route takes us along the Grand Canal to Piazza San Marco. Paddling under the Rialto is magical and we have some great audience along the way. But I don’t recall ever seeing such traffic jams on waterways!! Crossing from San Marco to  the quiet monastery of San Giorgio is just as chaotic: vaporetti, boats, water buses, gondolas everywhere, it is pretty hectic. Lunch break offers a rest on the calm monastery facing the Ducal Palace. Match-races and other SUP games are organized, before returning straight to our departure point via the Rio Novo. I am frustrated that I couldn't get the chance to go and paddle on all the smaller canals the city offers, namely those that can’t be sailed by motorboats. We stayed on the wider and overcrowded ways while our SUP can explore quieter and more exotic places.

While I was there, I decided to go paddle along the Lido. Totally different atmosphere: this is sea, with its long white sand beach, and has nothing to do with the other very side of the island. It is simply great to enjoy such a variety of locations within a small space.

So if you want to discover Venice by SUP, attending one of these events is a good opportunity at first, but consider staying a few more days to explore on your own the 'pedestrian' channels. Navigation is free and allowed and provided that you give priority to gondoliers, you can really experience the city in its singularity and magic. Hurry up, within 50 years, it is not clear what the city of lovers will become...