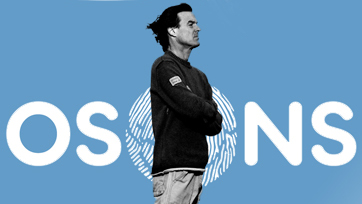 Watertalk with Nicolas Hulot about Climate change & his #osons call

Nicolas Hulot is a famous French TV figure who has hosted the adventure program Ushuaïa for years, travelling the world and showing its evolution throughout decades. A true nature lover and truthful activist, he is known for his endless knowledge on environmental issues and has become Special Envoy for the Protection of the Planet at the French Presidency. As the COP 21 is ready to take place in Paris in December 2015, Nicolas has launched a « dare-to-take-action-for-the-climate » call, inviting all citizens to sign his appeal in order to put pressure on decision makers during the conference. A real sea lover, Nicolas - the ambassador of our association Watertrek - talks here about climate and oceans in particular, and his true love for water.

So Nicolas, what are the consequences of global warming on the seas, oceans and other waterways ? Does that mean we will be able to enjoy the beach without ever being cold?

The disadvantages resulting from climate disturbances are unfortunately far outweigh from the few small advantages we could possibly get from it. Concerning the marine environment, I would mention two examples to illustrate this: ocean acidification and coral bleaching.

Every day, oceans absorb a quarter of the CO2 produced by man, causing a chemical modification of the sea water which results in its acidification. Dissolution of CO2 in sea water causes a decrease in pH (the lower the pH, the higher the acidit) and in the amount of carbonate ions (CO32-) which are one of the necessary elements for marine animals to make their skeleton, shells and other calcareous structures. The ocean acidity has increased by 30% in 250 years and this phenomenon is growing. Its effects and its interaction with other environmental changes remain unclear. It directly threatens species such as oysters and mussels consumed by man and will also impact marine food chains. At the current rate of CO2 emissions, oceanographers predict a tripling of the average ocean acidity by 2100, which is a first in the last 20 million years! It is clear that we far exceed the limits of the natural evolution of the planet.

Another major impact is how it affects coral reefs found in tropical and subtropical waters. An abrupt rise of a few degrees of the water temperature prevents their growth and breaks the association of algae-animal cells which is coral. This causes bleaching and the death of coral. If coral reefs only cover 1% of the ocean floor, they are essential for 25% of global marine life. They provide food and shelter for many species and play an important role in the climate.

Through these two examples, it is clear that our living universe is based on an extraordinary balance but an extremely fragile one at the same time.

How will this issue be addressed during the COP 21? Is there any specific decisions to be taken regarding the waters on our planet?

I can not prejudge the decisions that will be taken there, but out of the twelve days of the Paris International Conference on Climate Change (COP21), the 4th. of December will be entirely dedicated to oceans. That's the least we can do. The planet has indeed two sinks: forests and oceans. They absorb a quarter of CO2 emitted annually by humans into the atmosphere, they release oxygen and regulate the temperature. If temperatures keep rising, it will lead to more serious consequences, beginning with the rise of sea level and flooding threats, including in the Pacific Islands. Marine species are also affected, with consequences for food security. Not to mention ocean acidification. So the water is at the center of everything. We must act on two levels: limit warming, which will have a direct effect on the oceans, and increase efforts to adapt to the effects of deregulation.

What do you recommend? What should we do in order to preserve our seas, rivers & their ecosystems?

Scientists confirm this : much of the diversity of life on the planet is in its oceans, but they are still largely unknown to us. This enchanted world is now seriously threatened by the toll caused by human activities: global warming, coastal erosion, resource depletion, pollution, etc.

What will happen to the ocean - common heritage of mankind - in ten or twenty years if we all sea users, aquaculturists, fishermen, divers, ship owners, sportsmen, citizens ... do not learn to share and respect this space of life ? We, citizens, local and scientific actors, entrepreneurs, elected officials ... are all original sailors onboard « planet for Sea » for millennia, and still on a long voyage. Can, once again, wonder - which is a strength to get started - command respect and, above all, the awareness that we can all do something to go not towards a society of deprivation but towards a moderate society and thus maintain our seas alive. Let us keep in mind that the ocean, at the very source of life, carries with it our past and our future.

What is your relationship to the sea? Do you any specific practice and what do they bring you ?

Several times when I was filming for the show Ushuaïa, I had the privilege, I would say even more, the joy to meet animals with endowed sensitivity. When I shared water with whales, I do not have a stranger in front of me. We are from the same history, the same matrix. And besides science has confirmed: there are a lot of us in a whale and a lot of whale in us.

In terms of recreational water, I practice kitesurfing which is of great emotional intensity. It is close to magic. You feel you’re being suspended in the clouds, as if an invisible hand was pulling you up. I’ve practiced many water and air activities in my life. Rarely one of them has given me so much emotion. It's a mixture of flying and gliding, an absolutely unique way of caressing nature, but also of getting in touch with local people. Kiteboarding creates link.

What would be your message to future generations ?

DARE! It is high time that the awareness is translated into individual and collective actions. It is a struggle that requires the participation of all and everyone can be an actor. The environmental challenge is a great opportunity to give new meaning to the idea of progress. It is also a unique opportunity to devote to 2 new forms of solidarity: solidarity with all living beings and solidarity with future generations.

We must react quickly. We all have the opportunity to reduce our environmental impact by changing the way we produce and consume and to be fully responsible. In our everyday life, what we eat, the transportation we use, how we heat our houses are all actions that bind us to our environment. No individual action is ridiculous. Every bit helps. Let us try to improve our behavior, exchange our good ideas and good practices, mobilize social networks to influence public policies. At a country scale, this will help to move towards a positive impact. With enthusiasm and creativity, let us dare and remember this invitation by Théodore Monod: "The utopia does not mean unrealizable, but unrealized. The utopia of yesterday can become reality. "

This is the purpose of my book « The OSONS manifesto » and the petition "Head of State, dare". I invite you to sign it & join the more than 500,000 people that are already engaged - www.osons-agir-pour-le-climat.org. Finally I invite you to make your voice heard on November 29 during the great march to be held in Paris.