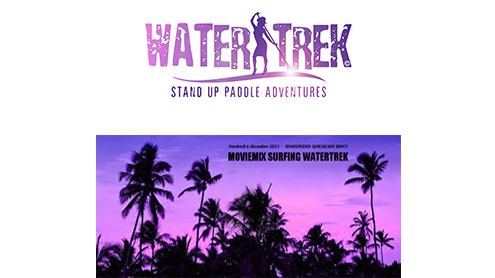 After a first year spent travelling, writing reports and organizing events, Watertrek became legally an association under French Law by December 2013, giving us a good reason to celebrate! And since december is hosting the famous boating show in Paris, it is definitely the best time to gather all of our sea lovers friends around a drink in honor of the new-born Watertrek. Boardrider Quicksilver Bercy in East Paris hosted about 100 guests for our first Watertrek Boogie Beach Party, the official launch of the association. The program was great: screening of a surf film shot in Indonesia by Director Matthias Di Francia and a DJ set 100% soundtrack by Moviemix, 2 DJs - Fred & Nicolas - both passionate with cinema and surf. Bringing together cinema world and sea world is definitely one important objective for Watertrek. It seems we did a pretty good job with that beautiful evens thanks to all the paddlers, surfers et actors who joined. Long live Watertrek & thank you all for supporting us in our first steps.

Article précédent
In the wake of Impressionist Painters: A Watertrek project for French TV
Article suivant
First Sup clean-up along the Joinville Canal