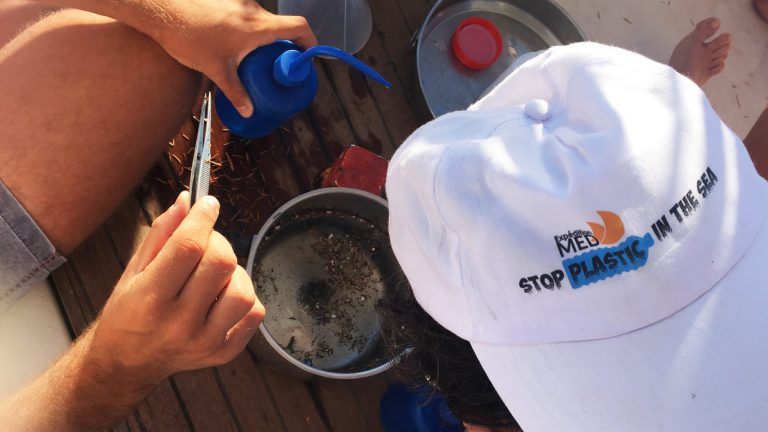 Watertrek on board Expedition Med to study microplastics

Summer 2016: Off to the Mediterranean Sea for a whole new aventure on the Expedition MED research sailboat, a French expert in research on micro plastics and the fight against waste discharge at sea. During a week, from Villefranche to Genoa, Watertrek had the opportunity to participate in a campaign of microplastics sampling to estimate the level of pollution. Indeed, the quantity of the particles can sometimes reach the same level as the plankton. These data are collected for scientific articles to move citizens. The association, headed by Bruno Dumontet, also alarmed the European authorities with its petition Stop Plastic In The SEA, which obtained lots of signatures.

Supervised by three young students, Corentin (photographer), Laura (marine biologist), and Simon (engineer student and founder of the SEA Plastics association), we did about one to two sea water samplings daily. Each sample kept us busy for approximately one hour, done using a steel manta net of 25 kg, with a 30cm mouth, and two wings that allows it to float on the surface of the water. A very thin net is linked to the mouth of the manta, ending with a collector which gathers samples. To complete these samples, we had to get the manta into the water, and form two teams: the first team would go into the cabin to write the GPS data and the sea conditions with precision, while the second one would obey the first team’s orders. Once immersed, we parted the manta from the boat by winching another boot, to protect the net from the boat’s wake. We dragged the net like this for 30 minutes. Once out of the water, we rinsed the manta with sea water, to push off all the particles in the collector. We detached the collector from the net and poured the sample in a big container, our ‘’ plastic soup of the day ‘’! The following steps are more thorough, despite the heeling: it consists of detecting, retrieving and sorting out the insects to send them to entomologists. When we put out all the insects, we removed the larger pieces of plastic (and jellyfish if there are any), making sure to rinse them out carefully to remove any particles. Finally, we add formalin sea water to conserve the samples.

So then, what can you find in these samples? is it as serious as they want us to believe? Yes, yes and yes again, sadly. In most cases, especially in coastal areas, we have noticed more plastic than plankton in our samples. Basically, there is more plastic than life. The one we conducted off the coast of Antibes is very concerning, if only for bathers nearby.

This week on board Expedition Med was an exceptional human adventure: what a delight to see that many people feel concerned with what is happening on the seas. Who would have thought that Marine the humorist, Health and Safety Manager in a big firm, or Julien, the perpetual traveler or myself the actress and committed leader of an environmental association, nicknamed ‘’the napper ‘’ by the crew because of my interest for breaks on the foredeck, would end up here? Add Hélène, young retiree who loves sailing boats, and is nostalgic for the time she spent with her children on boats, as well as Vanessa, communication genius who tries to use her skills to attract dolphins, and Virginie, ‘’marmot rising fish’’, who almost managed to unseat me from my position as the ‘’queen of napping ‘’, and you have the recipe for a successful week with strangers. Nothing is better than the love of the sea to bring people together.

These moments spent on the yacht skippered by the amazing captain Giulio, and fueled by the no less amazing Michelle have generated new ideas for Watertrek’s future. Collecting data can advance the cause of the oceans. We should think about getting the sup community involved. All over the world, there are paddlers who are regularly on the water. A manta net for SUP? Why not? We must think about how, for what and for whom, but we are sure to develop useful programs of participatory science in the future.