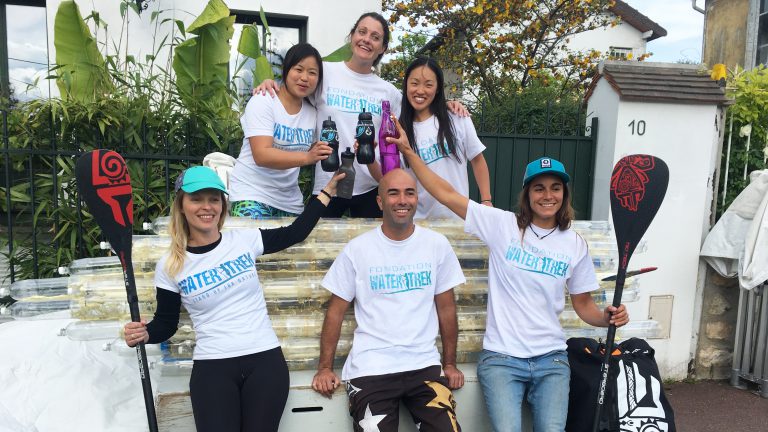 A Plastic Bottle SUP at the Eau Vive festival

Watertrek partnered with Le Grand Huit SUP Club last month for the first L’Eau Vive festival, celebrating stand up paddleboarding with races, clean-ups, recreational and educational activities on the water and land along the Marne River just outside Paris. The Watertrek crew came together from France, England and Belgium to join the festival revolving around fun and technical SUP races, as well as other activities like SUP Yoga, SUP dog contest, dragon paddle, giant SUP paddle for a team of paddlers, fun bikes, land paddling and more. The one and only, talented Olivia Piana - Women’s SUP European Champion and second in the world - was there to compete and take a stand against marine and riverine pollution with us, alongside Surfrider Foundation and other great organisations and festivalgoers. Watertrek’s stall showcased all things SUP-related including the construction of a SUP board made of plastic bottles: currently being courageously paddled across an epic 12 marathons by British-Brazilian adventurers and Watertrek volunteer fundraisers and educators, Carlos and Carolyn of The Whale Company.

Despite technical and logistical challenges, the team worked hard in rain, hail and shine to build a sturdy, double-decker plastic bottle SUP board. Upcycling 2-litre bottles proved to be difficult thanks to France’s very efficient recycling system and responsible citizens; and one layer of 1.5-litre bottles was not quite as ‘strong and stable’ as hoped. The French flag fin made of upcycled plastic bottle caps was the finishing touch on the plastic bottle SUP and its completion could not have been possible without the much appreciated help from Le Grand Huit founder and festival organiser, Jean Baptiste, and enthusiastic festivalgoers. So, the first double-decker plastic bottle SUP was completed just in time to make its debut on the water as part of L’Eau Vive’s friendly 5km fun race, together with local and international competitors including Watertrek’s ‘Plastic Monster’ - aka Wim Pyl from Belgium, the first person to paddleboard 240km in 5 days .

Alongside building the plastic bottle SUP, Watertrek proudly promoted educational activities for children (including big children!) such as:

And the awesome Surfrider Foundation Antenne locale de Paris organised an incredible clean-up along the Marne River where a whopping 1,200 cigarette butts were collected – imagine the impact as one cigarette butt will pollute 500 litres of water!

Taking a stand against single-use plastic for Starboard, 5 Gyres and #OneLess campaign, Watertrek founder, Séverine Vasselin, and Melanie Joe, Mei Li Quah, Carlos De Sousa, and Carolyn Newton of the Watertrek team were honoured to join forces with Olivia Piana on an impromptu photoshoot supporting the use of our refillable, reusable water bottles such as Water-to-Go.

Watertrek would like to congratulate Carlos and Carolyn for becoming the first people to complete a SUP marathon on a board made of plastic bottles on World Oceans Day! If you’d like to follow, join or help our two adventurers along their 12 marathons journey across Europe – helping educate communities, building plastic SUP boards, or hosting, please get in touch via The Whale Company.

Watertrek would also like to thank everyone involved in L’Eau Vive and in particular Gilles de Joinville for the warm welcome and amazing organisation and messages behind this first event as well as ITIWIT by Decathlon who are partnering with Carlos and Carolyn on their marathons.