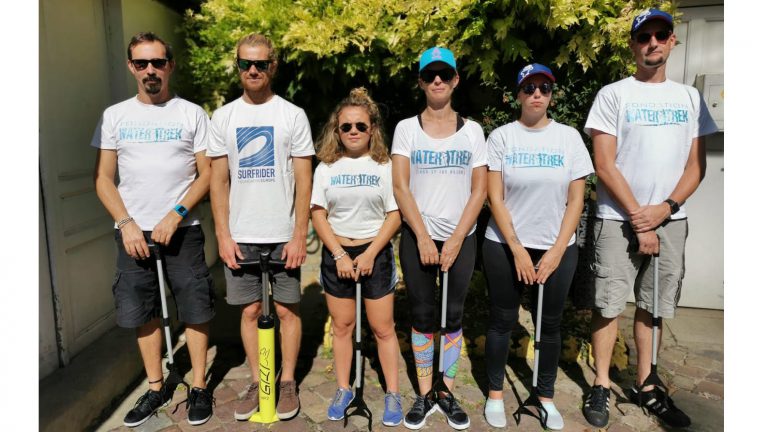 “In some ways my life won’t return to ‘normal’ after Noli as my mind is more focused on doing the right things.” How is that for an encouraging statement, coming from Paul - Starboard UK distributor - after he spent the weekend hanging with a bunch of inspiring people? It is proof of the commitments and beliefs that Watertrek is built on  "If you are aware, you care.” It fully validates the amazing outcomes achieved by Linzi Hawkins from SUP Kids who decided to launch the Protect Blue Conference – the sustainability conference that plays outside – during the Green Surf Festival in the stunningly beautiful town of Noli on the Lingurian coast of Italy from the 13th to 15th July 2017.

The goal of the outdoor, hands-on conference was to explore and identify how the SUP industry can fulfil its potential to become leaders in sustainability, with plenty of fun and education. Amongst the guests invited to share professional initiatives and ideas with the Protect Blue and Green Surf Festival participants, were some very proactive entities: Svein Rasmussen from Starboard, Michael Stewart from Sustainable Surf, Alan Laubsch from Lykke, Darryl Mootoosamy from B Corp UK, Haley Haggerstone from 5 Gyres Institute, Juli Schulz from The Climate Reality Project.

From a yoga fitness session by the beach punctuated with climate change education and quizzes, through hikes in the mountain learning about investing in mangrove trees, to Beers for Good – probably the best time and place to change the world – the three days were an incredible opportunity to brainstorm, connect and fuel our own projects with inspiring energy.

Everyone present was honoured to listen to the amazing story of one of most impressive SUP paddlers in the world, as Chris Bertish (inspirational speaker, author, extreme ocean athlete and ocean ambassador) spoke on the festival stage on Saturday as the blazing, hot sun went down. Chris shared the story of his epic adventure across the Atlantic Ocean with us – solo and unassisted on a specially made SUP vessel from Africa to the Americas for charity: a world first feat which is difficult to visualise as it was such an intense challenge. As well as the mental and physical challenges, Chris paddled two million strokes, through turbulent storms (there were only 3 days of calm water), survived Great White Shark and giant squid attacks, was faced with only one type of food for 93 days and nights – and became a global example to illustrate to us all that just about anything is possible, as long as you stay focused, know your goals, take it stroke by stroke and never give up. Creating impact and implicating positive change through our networks and communities can seem overwhelming, but it is possible; the word ‘impossible’ holds the key itself: I’M possible, we all are, and we can all make a difference. As Chris's mantra says, “Anything is possible… dream it, see it, believe it, achieve it.”

Protect Blue will return again as a leading forum to facilitate discussions and ideas through outdoor play and seek ways we can protect and continue standing strong together for our waterways and oceans.