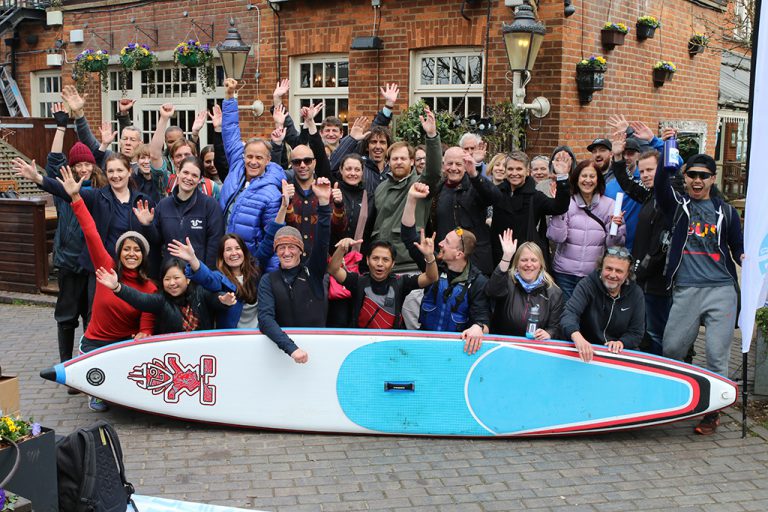 In April this year London was the scene for the launch of the first Paddle & Pick campaign which aims to draw attention to the problem of plastic pollution in our waterways. 80% of the rubbish found in our oceans comes from mainland Europe and unfortunately the Thames is part of the waterways that carry the rubbish out to the sea.

Between 8th-13th April 2016, paddlers, kayakists and other river users got together in 10 different locations to pick up rubbish on the riverbanks and in the water in order to raise awareness about plastic pollution in the centre of London. On the initiative of the Active 360 paddle club, Thames Estuary Partnership and Watertrek Foundation, a particularly festive launch day was organised on the Thames close to Hammersmith, the organisation of which was done by the Crabtree Pub. Around 50 volunteers met up early in the morning to take part in this first clean-up in partnership with Thames 21, Tideway and the Port of London Authority.

All the participants then met up again for dinner and to participate in a press conference moderated by French snowboarder Laurent Besse and Svein Rasmussen, creator of the Starboard brand and great windsurfing champion, Carolyn, creator of The Whale Company, and Ali of Rizboard Shorts present their fairtrade products and most notably some shorts made from recycled plastic bottles. The day finished back on the tide with a paddle up to Chiswick where we picked up more floating plastic and packaging on the way.

Svein commented : “ Thank you so much for putting on the event motivating so many people. How much better can it be than drifting down the Thames and picking trash as treasure, we are mad in most peoples eyes and I love it.”

The operations to pick up rubbish on foot and on water took place throughout London over 5 days, with Active 360 proposing new SUP clean-ups at Twickenham and at basins at Paddington, and Regent’s canal at Little Venice where the Green MP Sian Berry came to visit paddlers while workers from Merchant Square participated in the clean-up…in the rain. Edge canoes operate at Kew Bridge, London Kayaks at Greenwich, as well as EPIC SUP at Eels Island and Islington Boat Club at Islington.

All the clubs and partners that worked on the organisation of this first Paddle and Pick met-up again during a closing evening at the Crabtree pub which welcomed us again for an evening of prizes hosted by the adventurer Spike Reid, a prize draw took place to raise money and to thank the volunteers again.

The whole of Paddle & Pick was brought to life by a spirit of cooperation and exceptionally good humour and numerous people expressed their desire to join the cause with new projects. The creation of Watertrek UK is now underway and for sure the success of this first campaign wasn’t for nothing.

Previous article
Paddling in the Calanques with photographer Stef.Candé
Next article
Watertalk with French activist Laurent Lombard from Cannes