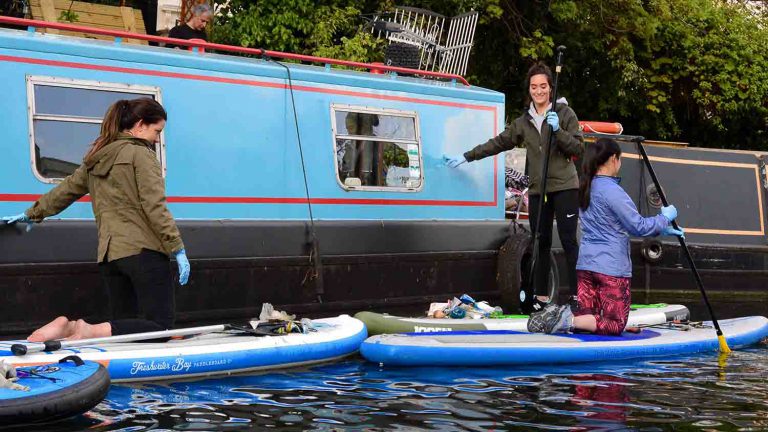 The Plastic Ocean Festival in London will be showcasing a series of events from April to September 2017 incorporating film screenings of ‘A Plastic Ocean’ documentary, sup marine and riverine clean ups and educational talks by scientists. The aim is to promote awareness and understanding of the damaging effects of plastic pollution in waterways and oceans and encourage individual and group action to Refuse, Reduce, Reuse and Recycle plastic, starting at home in London.

The Film ‘A Plastic Ocean’ is a powerful 45 minute documentary which sets out the scale of the problem worldwide and how we all need to change the way we use plastic. It is described by Sir David Attenborough as “one of the most important films of our time”.
“A Plastic Ocean is an epic global adventure following a documentary film maker and a world record free-diver as they travel the Earth discovering the shocking impact plastic is having on our oceans and the marine animals that live there. They investigate how our addiction to plastic is impacting the food chain and how our use and inappropriate disposal of this material may be affecting our health and wellbeing. Stunning underwater footage of all manner of marine life are juxtaposed with floating or submerged rubbish and marine animals caught in plastic webs as the expedition leads the two adventurers to unusual scientific discoveries, heart-breaking truths and important solutions to one of the biggest problems confronting mankind.”

The first event recently took place in Paddington, London on 22nd April 2017. Paul Hyman - founder of SUP Club Active 360 & Manager for Watertrek London - reports “Turnout was excellent with the small auditorium filled for the screening and every paddleboard and canoe out on the canal afterwards. Lots of plastic trash was collected including an inflatable horse! Some participants were already actively involved but many were new and are keen to continue to help and join the team.”

There will be many more opportunities to see the film and get involved throughout the festival period. More details on the Festival website www.plasticoceanfestival.com and our calendar.

Previous article
12 SUP marathons on a plastic bottle board
Next article
Swim or sink: Plastic Ocean returns in Paddington