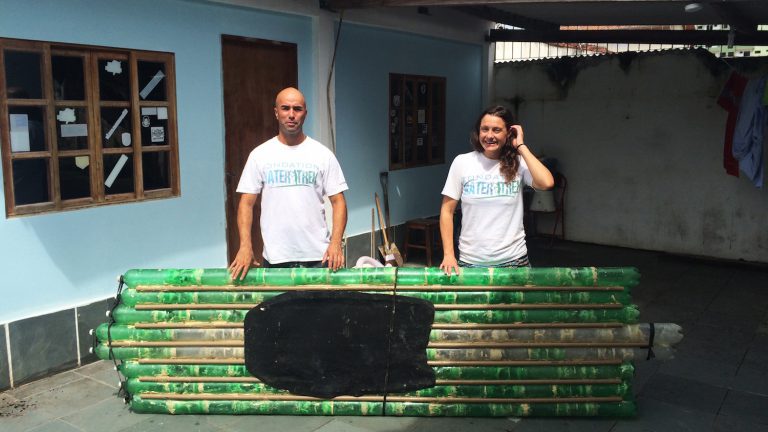 12 SUP marathons on a plastic bottle board

Commencing on World Ocean Day - 8 June 2017 - Carlos & Carolyn will paddle 12 marathons across Europe on Stand Up Paddle boards made of PLASTIC BOTTLES. In every location they will teach the local community how to build plastic bottle boards to raise awareness of the problems of Plastic Pollution in the ocean and to make SUP affordable for all.

Carlos & Carolyn are a Brazilian/British couple who love sports and care deeply about the environment. They are both teachers with a passion for educating others about the problems of plastic pollution and encouraging people to live a healthy, active lifestyle.

Carolyn has spent ten years raising awareness of the global threat of plastic through the creation of The Whale Company. She and Carlos became volunteers for Watertrek in 2016, as they felt aligned with Watertrek’s values and aims to bring people together to look after the environment.  Sadly, when you paddle, it won’t be too long before you see plastic and other pollution floating in the water.  The impact has a lasting effect and will make you want to do something about it.

Inspired by this, Carlos & Carolyn built their first paddle board out of plastic bottles in March 2017 in Brazil.  When they took the board to the beach for its first trip on the water, it received a lot of attention and sparked interesting conversations about plastic pollution in the ocean.  It was a very rewarding experience and the inspiration for the sup marathon expedition.

Since launching the expedition, they had over 13,700 views of their video on facebook and major press coverage.

Our 2 watertrekkers will attend the French event Course de l'Eau vive on May, 13th&14th and built a bottle board there. Make sure you join the process and get the chance to share a moment with our 2 amazing adventurers.

They will then head to Italy, Spain, Croatia & Greece to take part at various events, get local communities involved in the cause and perform their engaging marathons. A prologue is planned in Cannes during the International Film Festival.