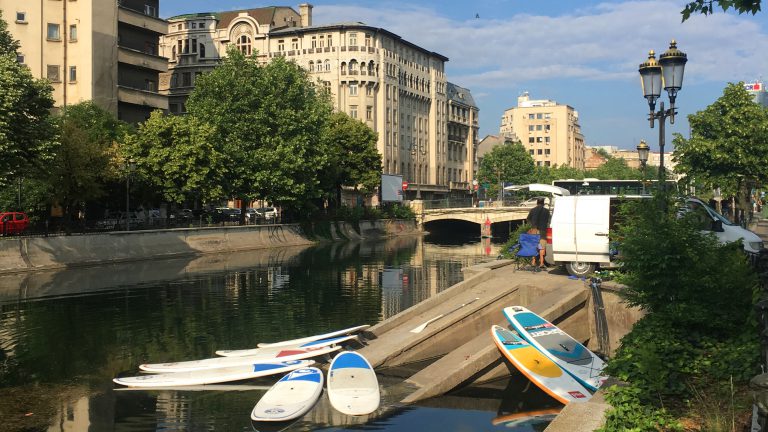 Watertrek was officially hosted for 3 days in Romania by a delegation of stand-up paddlers determined to promote their practice and stand for cleaner rivers, as well as willing to design a possible conservation project for the Donau.

Doctor Florin Paun and his wife Ingrid - both French residents with a Rumanian background - had invited Mathieu and Séverine from Watertrek as well as Stéphane from Sup Passion to meet numerous local athletes and to go paddle in unexpected places. It seems we were the first ever to paddle downtown Bucharest - thanks to Ministry of Sports – as well as on the Snargov lake, known to host the National Center for Olympic Sports... as well as the tumb of famous Vlad Dracul, also named Dracula.

Dr Florin Paun - an expert in aerospace and innovation - was the first man to bring SUP to the Donau Delta 5 years ago and gave his two boards to the local club Fit and Funny run by Razvan Marinescu so he could offer free sessions to the children of the villages along the Black Sea coast.

Florin and Ingrid also launched the initiative " Stand-up for Clean Mountains & Rivers " and have tried to educate their relatives and friends about plastic pollution. The couple used the marriage of their godson - to which we were invited - in Giurgiu, close to the Bulgarian border, to ask all their guests to make a donation to an environmental association and by the same token invited Prince Harry and Meghan of England to do just like them. Their objective was to create a first, and hopefully see such donations on wedding lists on a more regular basis…

The idea of an European Sup relay was mentioned, as Romania will chair the European Commission in 2019.

Huge thanks to Mister Ioan Denes, Ministry for Water and Forests; to Victor Sandu, Managing Director of Rumanian Waters ANAR ; to Adela Alexe, Director of the Training center Baza in Snagov, and to Madam Gabriela Firea, Mayor of Bucharest, for their warm welcome.