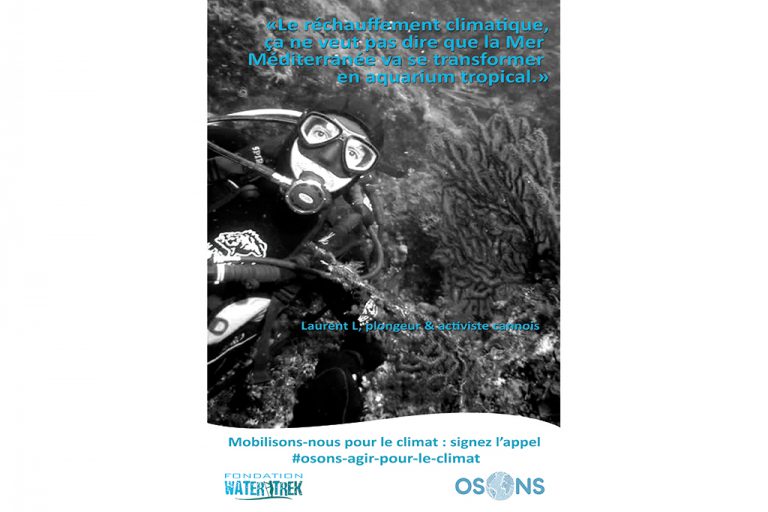 Category Awareness
Published on May 14 2015

Laurent Lombard has always been a passionate diver. Born in French Var, Laurent grew up in Saint-Maxime and then moved to Cannes. A traveler and an adventurer, Laurent worked as a fisherman until an unexpected event led him to commit very actively in protecting seabeds. An underwater video posted on his Facebook profile in May 2015 brought together more than 3 million viewers! Mr. Buzz tells us about his life, his commitment & the effects of his brand new fame.

Where did you get this love for the sea Laurent?

I was born in Saint-Raphael, I grew up closed to the sea. My grandfather was a forester, he passed on his love of nature to me. I started snorkeling at 8. After my military service, I went to the Merchant Marine School and became a fisherman and later a skipper. The sea has always been part of my life. But I was primarily fascinated by adventure and the sea, not necessarily by the environment.

So how did you come to do what you do today: film polluted seabeds?

I've always had the spirit of adventure, I've always wanted to explore the sea, to discover what was in it. After some years as a fisherman, I went to settle for 4 years in an isolated area of the coast of Tunisia, in Douala. I wanted to live experiences. That's where I’ve been the happiest in my life: when I had nothing! I was living with a local fisherman in a hut that we had built. We were using what the sea was bringing on the beach - pieces of wood, planks etc ... to make our shed. It was really an Robinson-Crusoe-like adventure! I started to clean up, just to have something nice in front of my house. My hut mate began to better sell his fish to tourists who were more numerous on the spot. He was no longer obliged to sell - cheaper - to wholesalers. That's how he realized that it was important to live in a healthy environment. I was surrounded by poachers, I gradually turned them into responsible fishermen.

When I returned to France, I wanted to do the same. I wanted to clean up. I approached the mayor and I proposed to create a new occupation: sea mender, but it didn’t work. I got hired by the Lyonnaise des Eaux in the Clean Sea Maritime Boat Service, where I was taking care of picking up floating litter. That only existed on the French Riviera at the time.

What is your most memorable aquatic experience?

I remember a rather painful experience. While I was diving once, a black plastic bag covered and remained stuck to my mask while descending. I found myself totally in the dark, wondering what was happening. On this day, something clicked in my head:  we could not leave the seabed invaded by plastic anymore. It was in Tunisia 10 years ago.

I began to dive more regularly once back in France, often with a small waterproof camera, and I began to share my pictures on You.Tube. I wrote an article for the magazine Sea & Coast, and then things led to another: after being mentioned in Nice Matin, the French TV show "Envoyé Special" contacted me to prepare the report "Mediterranean, a sea of plastics ". The aim was to explain the origins of waste and their journey along the rivers. With France 2, we also produced a report called "The Plastic Trap" for the show called "Infrared".

Between the two reports, I had the feeling that things were not going fast enough, I felt misunderstood, so I decided to climb a lighthouse & denounce sea trash. Just after the release of the report shot for Envoyé Spécial in 2011, I hung up there for 6 hours, hoping to alert the authorities. The reality is that I was starting to get tired. I really felt that this was useless, it was a lost cause. I went to Corsica to take a break.

When I denounce marine pollution, I feel like I’m trapped & stuck between two opposing worlds. We need to change our habits so that those two worlds can coexist - modern life & nature. If everyone gets used to putting trash in a can, it will be huge already. I believe that the majority of people do not realize what’s going on. I'm on the field, I really see things. Pollution is even more impressive when you see it on location, in the water. In reality, this is big and disturbing. That's why I'm trying to do everything to touch people, to film in the most realistic manner.

It seems that you have found a new audience since then? some fresh energy?

I returned to Cannes and unintentionally, my reflex as a "sentinel of the sea » came back to me. I dove, I filmed, I made a video just like that. This time, I posted it on Facebook instead of You.Tube. Against all odds, I gathered more than 3 million views! more and more people responded, shared my images, contacted me. I had several publications in the press, as in the Daily Mail and other foreign media.

The Mayor in Cannes reacted positively and came to me to inquire about what was going on. He understood that I had the technical knowledge to work on the issue. I had technical solutions to clean in a cheap way. He organized a clean-up and launched an advertising campaign inviting citizens to urban cleanliness & new gestures. Less waste thrown to the ground is less macro-waste in the water.

Things are starting to move. We hear more and more about the 7th continent and marine pollution. But the problem is also legal. What is macro-waste? Take for example your glasses: as you're on the ground, they are glasses. If they fall into the water, they become a waste, but legally, they are only glasses! this aspect hasn’t been integrated into the Blue Flag Label yet, macro-waste is not considered pollution, it's just an object in the water.

It is essential that the work should be done on a national scale, we need cohesion. But there are solutions, such as to act upstream, directly from sewers, or on the ocean currents that drain waste. Here for example, we suffer from the influence of the Ligure current which brings plastics from Italy. We can no longer fish in this area.

How does being close to the water affect you?

For me, being in the water means freedom, it is another world, adventure, discovery, an area without constraint. I had the opportunity to swim with dolphins and sharks and I never got afraid. I feel safe in the water. Time stands still, there's nothing in your head. When you are in nature, you develop a sensitivity, and then you better perceive how the people you meet feel and suffer.

I feel like I am a child of Cousteau or Hulot. When I was younger, I remember watching a show where Nicolas Hulot had his fingers bitten by a conger. These figures have touched me, they are genuine people, sea lovers, who have the ability to bring others to discover and love new things, to rouse passions.

Have you ever tried stand-up paddling?

I tried once in Corsica, with a friend on a boat, we paddled in the Lavezzi Islands, it was magical! we sailed around granite blocks with these amazing shapes! On the Lavezzi Islands, there are those incredible birds - the Cory's - who speak at night, you have the impression that the island is occupied by spirits, it's very surprising, it's scary!

Do you consider that you live in harmony with nature?

Yes, even if as a fisherman, I know I've done damages. I realized that with the sea, you can take but we must give as well. This is not a pantry from which you can take endlessly.

What would be your message to future generations?

I have a nephew who is a real fish. When he dives, he spontaneously takes a bag with him to pick up what he meets. Children integrate these notions very quickly. So I’d like to tell them: « Do not take example on us. You are the future! ".