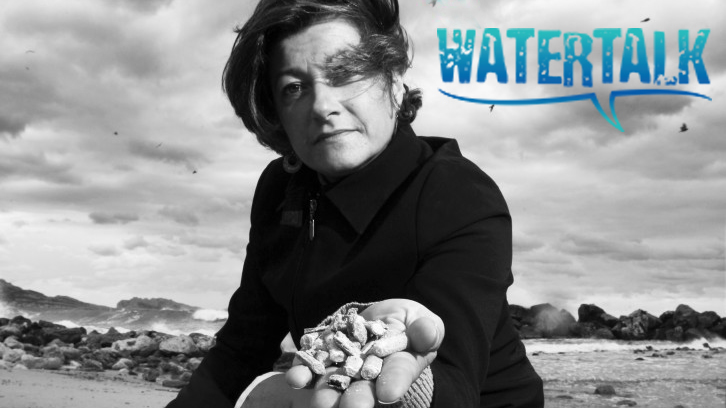 Isabelle Poitou is a marine biologist and one the first French scientists to have addressed the issue of marine waste as a real study subject. Along with François Galgani and Laurent Colasse, she wrote "A clean sea, mission impossible? ». She created the association Mer/Terre to help reduce litter at sea. She lives in Marseille where we’ve met, she talks about her passion and his work.

Where did you get this passion for the sea ?

I was born in the suburbs of Paris, but I spent my childhood in the waters of Brittany. My dad was a sailor, I started sailing very young, I constantly bathed and I knew very young that I would devote my career to the marine world, it was an evidence.

How did you get interested in the issue of marine waste? it is a brand new subject.

The sea told me. I was a student in marine biology in Marseille. After my Master, I did some social sciences and urban planning. I was looking for a thesis topic that would be relevant. Beyond the purely animal research I had done before, I felt the need to add a social dimension to my work, to build bridges between human & marine life. Following the advice of one of my teachers, I went for a walk along the beach, hoping to find inspiration. While I was observing floating waste, I started to get some ideas. They looked like they would always piled in the same corners. Was it pollution? Was waste an environmental degradation? was it a threat to biodiversity? did we have datas, quantities, figures? I had found the subject for my thesis, and as the same time a subject that would give a real meaning to my career.

How did your researches evolve ?

The first thing I realized was that we had no datas nor statistics on the issue, either qualitative or quantitative. Everything had to be done. At that time, in the late 90s, no institution had worked on the subject of macro-waste yet, there was no laws. The sinking of the Amoco Cadiz had led the French government to create an association - CEDRE - supposed to organize a "fight against accidental pollutions." But there was still no real thinking on public waste management.

François Galgani was the first to think of a proper census and to characterize waste. That helped get the interest of the media & the public.

Things continued to develop under the influence of certain European countries. The OSPAR - Paris-Oslo - convention was the first to propose a protocol in 2006. This initial work led to the « European Marine Strategies" in 2008. This was the beginning of a global thinking.

Working on my researches, I started to get closer to local communities in the hope of collecting figures. I conducted surveys on 37 towns in Provence, Monaco & 2 Italian municipalities. I worked with technical services to get estimates. At that time, I was working in the CEDRE which was hosted at the Ifremer Center in Toulon. I had done some great work on developping a local census protocol. 5 towns would send me daily feedback that I could link to the weather. Those datas have proved extremely powerful! They allowed me to establish a fairly clear reading of waste movements. For the majority of them, they came from watershed & would move towards the sea. From there, the opportunity to act & to propose political solutions appeared. It was also at that time that I decided to create my association Terre/Mer to share this knowledge.

How was your work received ?

Not always very well. I often felt very strong resistance - mostly emotional - from some of my institutional partners. Paradise is associated with the beach - we speak of heavenly beaches, we’re going on holiday to the water. Waste has a negative connotation. St. Augustin had the idea of hell while watching the dump of Jerusalem Gehenna. If we go further in the analysis, the sea represents the unconscious. To go and seek for waste means revealing a dark side society does not necessarily want to see. Although the ultimate goal might be positive, diving in this world is terrifying.

Remember this very strong image used in Surfrider Foundation campaign: it shows a little girl who’s lifting the sea as if it was a bedsheet so she can see what lies underneath. Waste is taboo, dirty, we prefer to ignore it. Hence the strong reactions from people I have addressed in the hope of an overall and collective thinking on the subject. The ocean has an indigestion, it "vomits" waste on beaches. It sends back the waste that we do not want. It is very educational but disturbing.

Do you notice some improvement in the environmental situation? or is it worse than before?

There is a real improvement. 40 years ago, treatment plants did not exist. We have made much progress in the last 40 years. But there's a force that drives us to produce unnecessary things. Because it is creating jobs and generating wealth, we overproduce, we make everything and anything. Full employment justifies all productive drifts, and that leads to deleterious extremes represented by Monsantos. The widespread brutishness encouraged by certain medias and the misuse of their power do not help.

Nature carries a very strong self-regeneration ability in itself. We did not invent recycling, we only borrowed this great renewing skill. Oil for example is derived from the decay of algae. This is a tremendous source of energy that knows how to regenerate. But mankind, using oil, has managed to manufacture plastic, which can’t rot, and can’t regenerate!! From a living, scalable and recyclable matter, we made our own block to the cycle!

I am always surprised that we learn so little from what nature has to inspire & teach us. Humanity is an ecosystem. Why don’t we study it as such? Why not observe the functioning of natural ecosystems and learn from their balance to develop new social models?

What are your new priorities ?

My new task is to ensure that manufacturers inform about the consequences of waste. Just like it is written on cigarette packs that "smoking kills", it would be wise to mention what happens when you throw a cigarette butt in the water. I hope to work more and more with multinational companies, with manufacturers.

It is also important that water policies - which are managed by agencies - and waste policies are integrated and work together.

What is your strongest aquatic memory ?

A truly mystical experience: I was 20 and I was traveling in Senegal. After jogging and meeting with a marabou in the evening, I went to swim alone with a mask. That is when I discovered fluorescent planction ... I thought I’d gone crazy! There were stars up in the sky, and then stars down in the water! I had no landmarks, I was in the cosmos, it was an incredible experience that has deeply rooted my relationship with the sea. Since then, I try to bath at night with a mask as much as I can!

What does the sea bring you ?

I remember my first dive. It was in the Mediterranean sea, though I had spent my entire childhood swimming in Brittany. I felt like I was in a cradle. No, I've never done any paddling, but I swim a lot. I feel a very strong need to be in the water. It is a source of profound joy, a connection with vastness and beauty. I feel like I’m coming into another dimension, I'm weightless, I feel harmony and confidence. I found myself in very dangerous positions several times, but each time, the water carried me away.

What would you like to say to future generations?

Keep the faith. Have the courage to be aware and responsible. Use your intelligence!